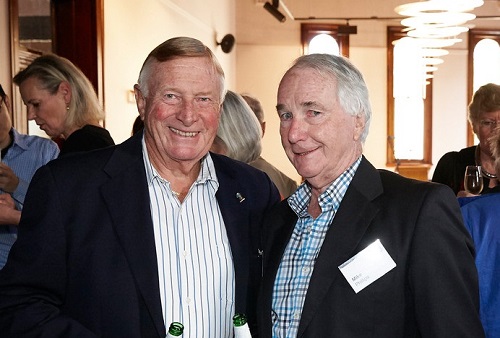 We want to showcase the amazing people that make 2RPH what it is. Introducing Brian Ollerton, 2RPH volunteer reader and Board member.

Can you tell us a little about your history with 2RPH?

I was made aware of 2RPH by a friend, Paul Mitchel, who was working on the station’s computer system as an employee of IBM. This was in March 2011 and I became a reader the next month. I had retired in 2008 after a career in international banking with Barclays Bank around the world.

Why did you decide to run for election to the Board?

It was suggested to me by [volunteer presenter] Ken Bock as there was a vacancy. At the time, I was on the Board of Concord Golf Club as Vice President, where I went on to be President. As the club has 1500 members and is private, I thought I could make a contribution with the experiences I had whilst sitting in the chair.

What do you enjoy about being part of 2RPH?

The contribution to the community is uppermost in my mind. It brings me a high level of enjoyment and satisfaction to realise that 2RPH helps a significant part of the tens of thousands of daily listeners living with disabilities remain informed of local and world news.

Are there any programs you try to tune into?

I turn on 2RPH and randomly listen to a wide range of programs. I do not have a strict weekly listening schedule but I do listen to The Australian newspaper as I am a regular reader of The Australian on Tuesdays.

What’s something you do in your spare time?

Being retired, I have a reasonable amount of spare time. I play golf on Wednesdays and Saturdays. I am on The Advisory Committee of Golf NSW and I am a volunteer for Meals on Wheels in the Canada Bay local government area. I also answer calls for a variety of readers put out by the Roster Team when readers are unable to do their regular shifts.