The Antiques Radio Show is a monthly program about antiques and the decorative arts, presented by Jolyon Warwick James. It explores news, reviews, events objects and goings on in the world of things that are old, beautiful or both – whether valuable or not! The program is broadcast on Monday evenings at 5:30pm every fortnight.

Interesting Items – A drum, a clock, a map, a “lewd book”, a gruesome execution, some walking canes and glass eyes. All old, some items (clearly) more beautiful than others.

Information – A 16th century board game (with a 21st century explanation), a very strange restitution story, some very queer history, and an odd stage play about an antiques dealer.

Information – What can nations do to prevent heritage items disappearing overseas? We look at two situations. In this episode: a remarkable story of an early 19th century painter with very severe disabilities; the British Museum’s willingness to display underlines the changing face of attitudes towards sex, religion and politics; and, a potter escapes from the flames.

Interesting Items – How well-heeled must you be to afford a pair of Napoleon’s boots? What is a sampler and what is the price for an early colonial one from Van Diemen’s Land? We look at comics, typewriters, ivory plaques and a ring worn by a Jewish soldier in the Roman army.

Information – Buyers Premium is explained, and the question of “What is art?” comes into focus. We don’t provide an answer, but try to help you decide your take on it - is art all just “bananas”? Tack on a bit of “ozzie humour”.

Interesting Items – the cost of whistle blowing (and the penalties), an album of Railway tickets, insurance plaques (what do they do and what do they cost?), “The Father of Parole” and an “Aussie name to watch”.

Information – Australia gets back some treasures from German Museums. Hitler memorabilia – should it be sold ? An interesting angle on the debate and the curious result of such a sale. Another example of the benefits to society of Art Galleries and Museums and an art lover’s dating app – dubbed “tinder for people who love museums”. And what actually is an ounce?

Interesting Items - When were Christmas cards invented? What price was a first issue copy of Great Expectations (that’s the book, not what you expect to get in your stocking.) A suffragette tea service, a painting of a family listening to Lord Haw Haw and anyone for Sphairistike? All are fully explained, and prices revealed.

Information – A Christmas quiz (and answers)! The extraordinary discovery of Queen Elizabeth’s (Tudor not Windsor) dress and the Art Gallery of NSW expands.

Interesting items – Problems with a Maori cloak (which didn’t sell) but none with a Polynesian club and a metal (sic) cricket bat, once used by Mr D. Lillee, both which sold well. A huge premium for Poe’s pocket watch (provenance assured).

Interesting items – Dinky cars are collectable, as are advertising broadsheets of yore, a Lambeth Doulton Bear surfaces, and there’s a bit about Horace (the Roman poet) and his literary link with Captain Cook. All respective items sold successfully. But we have another story about something which didn’t – the first Porsche car made. We find out the glitch and hear about of the Bob Hawke sale which had no glitches and much glee (from the successful buyers).

Information – We examine the controversy of how museums describe themselves. How would you define a museum? ICOM has difficulties agreeing! And who is ICOM?

Interesting items – Boris Becker’s trophies come up for sale, the Beatles contract is signed over to a new owner and some famous football boots come under the hammer.

Information - Napoleon’s guitar is in Australia. We find out how and why. The thorny question of the trade and some alleged illegal trade in Egyptian Antiquities is covered. The story of the illegitimate sons who became heir to an estate - recently in one case and in the 19th century in another instance. The latter being the progenitor of one of London’s finest museum’s and the subject of a book review (which we read). And lots more.

Interesting items – Famous cricket ball is sold for a famous price, taxidermy is popular and pricey, and Beethoven’s hair brings a symphonic price. An Esther scroll reels off a tidy sum and a discussion as to whether it is in fact Iraqi or Persian. And what does a Queen (or member thereof) collect?

Information - News of the Australian Museum’s makeover. And are political cartoons too non-PC to publish? We also find out how Youtube’s new rules impact on Leni Riefenstahl’s work and views on a Venice Biennale’s exhibit. And what exactly is a “curfew”? – the item, that is…

Interesting items – World’s most expensive biscuit? A century-old inedible relic goes for the price of many thousand cups of tea. A charity shop gets lucky with a Moorcroft Vase, and a multi-million-dollar Chinese bowl that had been used for tennis balls. And what is a Rackets racket (“no you aren’t seeing double”) and what must you pay to own one? An update on that copy of Lady Chatterley’s Lover and a ”letter to the editor” about the book’s ability to offend. A Sydney Nolan found in a cupboard, and bones in a box.

Interesting items – An Australian museum buys a Suffragette bravery medal in England, and a First World war soldier is saved by the bullet hitting a penny in his pocket. The coin sells for a lot more a century later. Second World war quick disposal garments (for parachutists wanting to assimilate quickly) and investing in Whisky. What can a bottle sell for? Spirited bidding for the most expensive bottle ever.

Information – Does art care if it offends? Museum has problems with an exhibit and an interesting response from the artist. Similarly, how does Christopher Columbus offend and what happens as a result? We examine an ancient nautical term which has acquired a completely new meaning in US – due to a spelling mistake?

Interesting items – A sporting bid for an All Black’s rugby shirt? You need a deep pocket! And who would have thought of padlocks as collectable? 16th century ones were a work of art and a worry for the pocket. If that’s bizarre – how about a gold baked bean. Why would Heinz buy one of their own kind??

Information – There actually was a piano on the First Fleet. We hear about how there are two contenders for that title. We read an obituary for late and great Australian and international antiques dealer, Martyn Cook. A world first for Australia - world’s most expensive ever Museum re-location – Sydney’s Powerhouse Museum to Parramatta. Australia also hits the front with a top listing for the most visited contemporary art museum, Sydney’s MCA. Finally, a bit about museum restitution of historically ill-gotten artworks and artefacts. The problem is complex – as we hear.

Interesting items – Do you know when Valentine’s Day cards were invented? In this episode, we also explore how an Antarctic sledge came onto the market and read about a group of 19th century Australian Goldfields jewellery sold in England. How did it get there and what did it fetch?

Information – A truly wonderful charity in operation! We read about it organising the taking of terminally ill persons to art galleries and exhibitions. A "letter to the editor” about causing damage at an auction viewing (and the auctioneers unexpected response) and some thieves foiled in their attempts to steal a painting from a museum. A piece of trivia is discussed – the question of how one expressed the idea of “clockwise” before clocks were invented!

Interesting items – An early painting of a cricket match spins a good story but tests the pocket – as does a Louis Vuitton travel trunk. Corkscrews come in all shapes and forms but we look at one that has no rivals! And what price the wine in the bottle it opens!

Information – It’s hard to believe that labels on museum objects could raise a storm. We read about just such a furore arising from a British Museum response to a Sydney Powerhouse Museum inquiry (storm in a showcase?). Could Monty Python fly their circus at the V & A Museum? Listen to their views. We read about how commerce and advertising latches on the finer things in art – to help them sell their products, such as toothpaste. Find out where Henry VIII was conceived! The bed has been found.

Interesting items – It’s sometimes hard to understand why empty beer cans can attract so much positive interest but we find out why and how much. Does beauty apply, or is it collectomania? Perhaps in the eye of the drinker. Certainly the Lalique silver belt buckle we read about was highly appreciated for its aesthetics. Attractive in possibly a different way is The Fallen Madonna with the big boobies. This TV comedy prop from ’Allo! ‘Allo! actually came under the hammer! Who bought it and for how much?

Information – Though sounding a little theatrical, there is a real issue of the occasional heart attacks when looking at art. We read about this and another gallery problem of damage to objects caused by “selfie” takers. We explore the protocols of nude modelling and read a book review of “Macaroni mania” – which is not about cooking!

Interesting items – For those who remember the days of pen and paper we hear about a beautiful glass Baccarat paperweight. What makes it so desirable? Who was “mouseman” Thompson and what was the distinguishing feature (insignia) of his furniture? For the traveller, or railway buff, we look at what happened to the “Flying Scotsman” nameplate (the rest of the engine is elsewhere). If you are decorating your sitting room, you might not consider a Mammoth skeleton on the grounds of space. But it's nice to know what they cost in case your circumstances change. We end with a touching story of a First World War Soldier’s watch, re-discovered and repurchased by descendants.

Information – Or is it trivia? Can monkeys hold artistic “copyright”? Has any monkey ever tried? We read about a bizarre court case….! The Antiques Radio Show passes on a useful tip (warning) about not swimming in Venice’s canals – and the consequences if you do. And staying in Italy we find out that the Leaning Tower of Pisa leans less – and what it means for you!

Interesting items – We hear about the details of the sale of the actual copy of Lady Chatterley’s Lover used in the 1960 “obscenity trial”. Older and less risqué (or likely to corrupt?), is the story of the large dining table made from timbers of a wrecked Spanish Armada galleon. What price fantasy and being taken in (Sir Arthur Conan Doyle was!)? Some expensive 1917 photographs of the famous “Cottingley Fairies”.

Information – The splendid painting “The Paston Treasure” is the signature image of the Antiques Radio Show program. The picture’s content is described, and its significance discussed. There is a book review of Ceremonial Maces (in Australia) and details of exhibitions and events to be visited. Do you know the historical origins of what we now describe as the “hash” tag, button or key? The word had been corrupted (apparently unlike the 1960s readers of Lady Chatterley’s lover…..!) We explain! 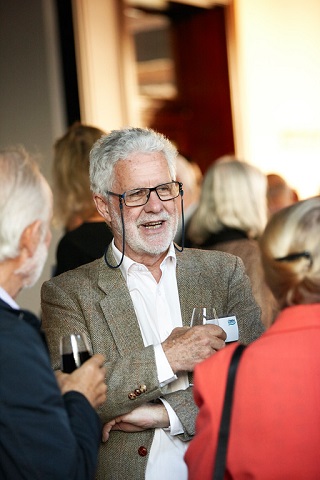 Jolyon Warwick James was born and educated in England and is an independent silver professional based in Australia. He is an Honorary Associate of the Museum of Applied Arts and Sciences (Sydney), and founder member (and twice President) of the Silver Society of Australia. In London Jolyon is a Freeman of the Worshipful Company of Goldsmiths, Fellow of the Society of Antiquaries and a member of The Silver Society.