Volunteer reader, Wendy Toogood, who listeners can hear regularly reading for The Australian, shared her story of learning about 2RPH and eventually deciding to contribute to the station. 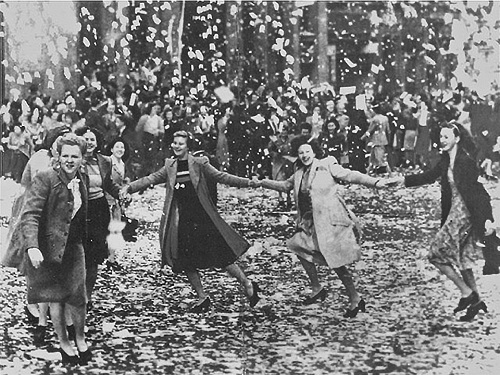 “A few years ago, I became interested in finding a radio station for my mother, Elaine Toogood, who is 95 and legally blind. I came across Radio 2RPH at that time but unfortunately the signal didn’t reach the Central Coast where my parents were living.

“Nevertheless, I thought that Radio 2RPH sounded like a really valuable organisation. As a recently retired Head Teacher of Business Studies with TAFE NSW, I was looking for worthwhile voluntary work to occupy some of my time. I applied to be a reader, sat for an audition, and after an orientation session I became a trainee reader [in 2019].

“My mother's story, however, is that, as a 20-year-old, she was working in the St James Building in Sydney as a fine dressmaker, on the day the war in the Pacific ended (8 August 1945). She and her friends heard about the announcement and came down out of their building and rode a truck to Martin Place where they danced together beneath the falling tickertape. Thousands of people were in the streets celebrating the wonderful news of the end of the war.

“A photo of her dancing with her friends appeared in the newspaper of the day in 1945 and has become quite famous. The same photo appeared again in the Daily Telegraph recently to celebrate 75 years since VP Day.”

[Image 1: Elaine Toogood is second from the right, in the light-coloured overcoat].

[Image 2: The same photo appeared again in the Daily Telegraph recently to celebrate 75 years since VP Day. The Telegraph also interviewed Elaine and wrote a story about her.]